Kent Couch (L) and Fareed Lafta as they Lift-Off!

The thought of attaching some balloons to your lawnchair and flying away was once the legend of just a few, strange folks out there who dreamed of soaring above their mundane existences. No more. According to a new USA Today article, the Lawnchair Flight Phenomenon is growing!

Over the weekend, July 13-14, a pair of lawnchair aviators took off from their home of Bend, Oregon. According to USA TODAY, about six hours into their flight, Kent Couch and Fareed Lafta started to descend from an altitude of 10,000 feet because of the weather.

About 90 volunteers and several hundred onlookers counted down and then cheered as the pair lifted off from Couch’s Shell gas station. The duo safely cleared a two-story motel, a coffee stand and a light post.

“The interesting thing is, anybody can do this,” Couch, the veteran of several lawn chair balloon flights, said before the flight. “They don’t have to sit on the couch thinking, ‘I should have done it.’ They can do it.”

Is Kent Couch the subject of the bright, brilliant, beautiful TRW musical FLIGHT OF THE LAWNCHAIR MAN? Just who is the subject of the musical is…is the subject of some mystery! The show’s plot follows the quiet, suburban life of the fictional, (or is he!?) Jerry Gorman. When it all becomes too much to bear, Jerry attaches four hundred helium balloons to a backyard lawnchair and takes to the sky. Jerry meets a slew of very colorful characters and perhaps himself on this uplifting musical journey.

The musical’s subject has now become the stuff of real life once again, with Kent Couch in the pilot’s seat, this time with a patriotic co-pilot. Fareed Lafta, a mountain climber and sky diver, said he had shared Couch’s childhood dream of floating like a cloud. He sent Couch an email two winters ago after reading accounts of Couch’s earlier flights. He had a wish to use the flight to raise awareness of a subject he is passionate about. “I want to inspire Iraqis and say we need to defeat terrorists,” Lafta said. “We don’t need just an Army. We need ideology and to just have fun.” 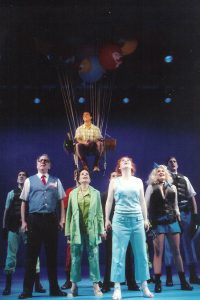 The USA Today story relates that volunteers filled 350 5-foot diameter red, white, blue and black balloons with helium and tied them to Couch’s homemade tandem lawn chair rig. The balloons were arranged in bunches to represent the colors of the U.S. and Iraqi flags. An American flag flew from the bottom of the framework supporting the chairs. Just before liftoff, they had to ask children in the crowd to return four balloons to provide extra lift. And, they were off, albeit for a less successful flight than they had hoped, due to thunderstorms early in their trek. Click here to read the whole story in the USA TODAY.

The Lawnchair Flight thing was an little more than an urban myth when Hal Prince, took to the helm of the Robert Lindsay Nassif (composer-lyricist) and Peter Ullian (librettist) vehicle in 2000 as one of a trio of musical one-acts packaged as 3hree. Prince, the multiple Tony Award-winning producer and director helmed his third of the musical — which premiered at Prince Music Theater in Philadelphia in 2000 and played the Ahmanson Theatre in Los Angeles in 2001 — and then commissioned the expanded version of THE FLIGHT OF THE LAWNCHAIR MAN. Theatrical Rights Worldwide development staff have been fans of the show since its 2004 showcase at the National Alliance for Musical Theatre in New York City. It joined the TRW catalog in 2006.