MONTY PYTHON’S SPAMALOT is currently touring throughout the United Kingdom, Ireland, and United States/Canada. Certain licensing restrictions may apply during the duration of these tours.

Find your grail and give your audiences and performers the chance of a lifetime to experience one of the greatest musicals of the modern age, Monty Python’s Spamalot! Lovingly ripped off from the classic film comedy Monty Python and the Holy Grail, Spamalot retells the legend of King Arthur and his Knights of the Round Table, and features a bevy of beautiful show girls, not to mention cows, killer rabbits, and French people. Did we mention the bevy of beautiful show girls? The 2005 Broadway production won three Tony Awards®, including Best Musical, and was followed by two successful West End runs.

Watch the trailer from the UK tour of Spamalot! 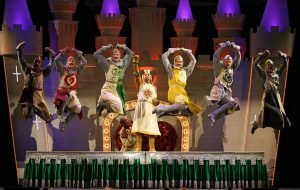 The play begins with a historian giving a brief overview of medieval England. An idyllic Scandinavian village appears, with gaily dressed Finnish villagers singing and dancing to the “Fisch Schlapping Song.” The Historian returns, irritated, and tells them he said “England”, not Finland. The villagers disperse and the pastoral forest is immediately replaced by a dreary, dark village with penitent monks in hooded robes chanting Latin prayers and hitting themselves in the face with wooden boards. King Arthur travels the land with his servant Patsy (“King Arthur’s Song”), trying to recruit Knights of the Round Table to join him in Camelot and his quest for the Holy Grail. He encounters various strange people, including a pair of sentries who are more interested in debating whether two swallows could successfully carry a coconut than in guarding their castles. Sir Robin and Sir Lancelot meet as they attempt to dispose of the sickly Not Dead Fred (“He Is Not Dead Yet”). They agree to become Knights of the Round Table together. Meanwhile, Arthur attempts to convince a peasant named Dennis Galahad that he (Arthur) is king of England because the Lady of the Lake gave him Excalibur, the sword given only to the man fit to rule England. However, Dennis and his mother, Mrs. Galahad, are political radicals and deny that any king who has not been elected by the people has any legitimate right to rule over them. To settle the issue, Arthur has the Lady of the Lake and her Laker Girls appear to turn Dennis into a knight (“Come With Me”). Cheered on by the girls (“Laker Girls Cheer”), the Lady of the Lake turns Dennis into Sir Galahad and together, they sing a generic Broadway love song (“The Song That Goes Like This”). Together, with Sir Bedevere and Sir Not-Appearing-In-This-Show (a knight resembling Don Quixote who promptly apologizes and then leaves), they make up the Knights of the Round Table (“All for One”). The five knights gather in Camelot, a deliberately anachronistic place resembling Las Vegas’s Camelot-inspired Excalibur resort, complete with showgirls and oversized dice (“Knights of the Round Table” / “The Song That Goes Like This (Reprise)”). In the midst of their revelry, they are contacted by God (voiced by John Cleese) who tells them to locate the Holy Grail. Urged on by the Lady of the Lake (“Find Your Grail”), the Knights set off. They are viciously taunted by lewd French soldiers at a castle they come to, and attempt to retaliate by sending them a large wooden rabbit in the style of the Trojan Horse; however, they realize after the fact that it was not as simple as leaving the rabbit and walking away – they were supposed to be inside of it. Defeated, they leave in a hurry when the French begin throwing various barnyard animals – including cows – at them (“Run Away”).

Sir Robin and his minstrels follow King Arthur and Patsy into a “dark and very expensive forest” where they are separated. King Arthur meets the Knights who say Ni, who demand a shrubbery. King Arthur despairs of finding one, but Patsy cheers him up (“Always Look on the Bright Side of Life”) and they find a shrubbery shortly after. The Knights accept it, but next demand that King Arthur put on a musical and bring it to Broadway. The Black Knight appears but King Arthur more or less defeats him by cutting off both his arms and legs, impaling his still-alive torso on a door, and leaving to find Sir Robin. Sir Robin, after wandering the forest for some time (“Brave Sir Robin”), finds King Arthur and insists that it would be impossible for them to accomplish this next task (“You Won’t Succeed on Broadway”). King Arthur and Patsy promptly set off in search of Jews. While the Lady of the Lake laments her lack of stage time (“The Diva’s Lament”), Sir Lancelot receives a letter from what he assumes is a young damsel in distress. He is a little surprised to find that the damsel is actually an effeminate young man named Herbert (“Where Are You?” / “Here Are You”) whose overbearing, music-hating father, the king, is forcing him into an arranged marriage. Lancelot advocates for Herbert after the king returns, and Lancelot is outed as a homosexual in the process (“His Name Is Lancelot”). King Arthur begins to give up hope of ever putting on the Broadway musical and laments that he is alone, even though Patsy has been with him the entire time (“I’m All Alone”). The Lady of the Lake appears and tells Arthur that he and the Knights have been in a Broadway musical all along. All that’s left is for King Arthur to find the Grail and marry someone. After picking up on some not-too-subtle hints, Arthur decides to marry the Lady of the Lake after he finds the Grail (“Twice In Every Show”). Reunited with his Knights, Arthur meets Tim the Enchanter who warns them of the danger of an evil rabbit. When the rabbit bites a knight’s head off, Arthur uses the Holy Hand Grenade of Antioch against it, knocking down a nearby hill and revealing that the “evil rabbit” was actually a puppet controlled by a surprised puppeteer. A large stone block showing a combination of letters and numbers is also revealed. After pondering the final clue, Arthur admits that they’re “a bit stumped with the clue thing” and asks God to “give them a hand”. The grail is “found”; Arthur marries the Lady of the Lake (who reveals that her name is Guinevere); Lancelot marries Herbert; and Sir Robin decides to pursue a career in musical theatre (“Act 2 Finale/ Always Look on the Bright Side of Life (Company Bow)”).

1 female and 6 male featured roles. Many casting opportunities for female roles in the ensemble.

KING ARTHUR (Late 30s-60s.): The King of England who sets out on a quest to form the Knights of the Roundtable and find the Holy Grail. Great Humor. Good singer.

SIR ROBIN (30s-40s): A Knight of the Roundtable. Ironically called ‘Sir Robin the Brave,’ though he couldn’t be more cowardly. Joins the Knights for the singing and dancing. Also plays GUARD 1 and BROTHER MAYNARD, a long-winded monk.

SIR LANCELOT (30s-40): A Knight of the Roundtable. He is fearless to a bloody fault but through a twist of fate, does discover his ‘softer side.’ This actor MUST be great with character voices and accents, as he also plays THE FRENCH TAUNTER, an arrogant, condescending, over-the-top Frenchman, the KNIGHT OF NI, an absurd, cartoonish leader of a peculiar group of Knights, and TIM THE ENCHANTER, a ghostly being with a Scottish accent.

SIR GALAHAD (30s): A Knight of the Roundtable. Begins as Dennis, a lower class ‘mud gatherer’ who becomes Knighted and transforms into the dashing Sir Galahad. Also plays PRINCE HERBERT’S FATHER, a wealthy, brutish Yorkshireman man at odds with his sensitive son, THE BLACK KNIGHT who is always ready to duel despite multiple injuries. Strong bari-tenor singing required.

THE LADY OF THE LAKE (20s-30s):A Diva. Strong, beautiful, possesses mystical powers. The leading lady of the show. Great singing voice is essential, as she must be able to sing effortlessly in many styles and vocal registers. Especially seeking actresses of all races for this role.

THE FOLLOWING ROLES ARE PLAYED BY THE SAME ACTOR (20s-30s): Tenor singing required. Very good mover. HISTORIAN: A tweedy academic. NOT DEAD FRED: A sickly little fellow who, despite others’ beliefs, claims he is “not yet dead.” FRENCH GUARD: The condemnatory French sidekick to the French Taunter. MINSTREL: In Sir Robin’s band. PRINCE HERBERT: The hopeful and frilly prince who loves to sing and pines for his love atop a tower.

SIR NOT APPEARING may double as THE DANCING MONK

A MALE DANCER appears as THE DANCING NUN

THE VOICE OF GOD may be pre-recorded.

TWO FRENCH GUARDS are two of the MALE ENSEMBLE

CASTING TIPS: Above you can see THE LADY OF THE LAKE, her LAKER GIRLS, and the five chorus/ensemble numbers that already involve female cast members.

Here are some suggestions for characters that female cast members can play with great success or use these characters to create more featured roles for your ensemble:

DEAD FOLKS in “Not Yet Dead”

Optional Add On: Broadway String Packet available! (Violins 1, 2 & 3, Violas and Cellos.)  Contact one of our licensing representatives for details. **The orchestration for the licensed version of MONTY PYTHON’S SPAMALOT contains a reduction of the Broadway string parts which are played by Keyboard 2 and Keyboard 3. If you choose to order the Broadway String Packet for your performance, you can either use the live strings as a replacement for the KEYBOARD 3 part or alongside it to enhance the string sound in your orchestra. However, should you choose to use the strings as a replacement for Keyboard 3, be aware that Keyboard 2 remains essential. In addition, please be advised that the Broadway String Packet is an additional item and therefore, the Piano/Conductor book contains cues for the Keyboard 2 and Keyboard 3 parts, but not for the individual string parts.

If you are interested in inserting Eric Idle’s “Finland” text at the beginning of your program, e-mail your request to licensing@theatricalrights.com to receive a three-page PDF file.

Norcostco, Inc. has added SPAMALOT to their rental inventory.

Costume Armour, Inc. now has SPAMALOT armor for rent or sale, including THE BLACK KNIGHT and SIR BORS.

VOS Theatre (VOS Theatre has a full show for rent from costumes to props to set to projections.)
PO Box 274
Cobourg ON K9A 4K8
Canada

Costume Workshop has a set of SPAMALOT costumes (including all working trick costumes) for productions in the UK.