Profiles, interviews, & news about the creative minds that make our musicals possible

That Johnny Cash remains a superstar almost ten years after his death in 2003 is proof-positive that he has achieved a level of ‘cool’ that is nearly unmatched in the history of popular music. He is revered by artists from across the spectrum of musical styles. On what would have been his 80th birthday, February 26, 2012, there were scores of musical celebrations around the world to mark this milestone of the Man in Black. From Brooklyn to Bakersfield and beyond, thousands of Country & Western fans, hipsters, rockabilly hepcats and musical theatre fans gathered to honor one of the greatest recording and performing musicians of all time.

And, in Brooklyn, NYC, for 8 years running, Alex Battles and his band The Whisky Rebellion have presented a sold out Johnny Cash Birthday Bash. The New Yorker magazine gave the show a rave review in past years and it sells-out in advance each time.  This year’s celebration was a two night affair, with Battles and his band performing the legendary “At San Quentin” concert on Friday, February 24 and the “At Folsom Prison” concert on Saturday, February 25. The fever pitch that Battles and Whisky Rebellion work the crowd into has become the stuff of legend! 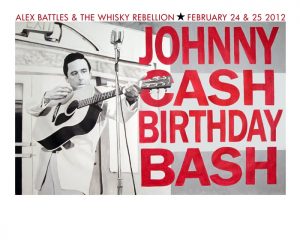 A quick search of Cash’s birthday celebrations leads to hundreds of smaller affairs from coat-to-coast and around the world. These homespun parties have the ring of authenticity about them, especially those that are in some real roadhouse honky-tonks where just the sound of the joint’s name brings images of cold beer and fidgety neon signs. Like Sylvia’s place in fellow legend Elvis Presley’s musical ALL SHOOK UP, these rough and tumble places take you back to the early days of rock n’ roll!

And now, on the other end of the scale, according to Rolling Stone magazine, a star-studded 80th birthday tribute to Cash has been announced for April 20th, 2012, at the Austin City Limits Live venue in Austin, Texas. The concert will feature appearances by Kenney Chesney, Lucinda Williams, Kris Kristofferson, Jamey Johnson, Chris Cornell, the Carolina Chocolate Drops, Shooter Jennings and Ray LaMontagne.   The show is being billed as “We Walk the Line.” Read more at Rolling Stone.

Also featured in Rolling Stone’s coverage of the beloved icon’s 80th, is news of Cash’s siblings, children and grandchildren who gathered at his boyhood home in Dyess, Arkansas, to celebrate the upcoming restoration of the crumbling 1930s house, then headed to the town’s community center to sing and share stories about the late star. Read more: www.rollingstone.com.

And, to get in on the ‘Cool Cash’ factor, click here to visit the PerusalsNOW™ Store and read and listen to RING OF FIRE: THE MUSIC OF JOHNNY CASH, available exclusively from Theatrical Rights Worldwide.

For more information on licensing your production of RING OF FIRE, click here to visit the show’s homepage.